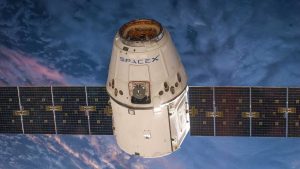 One of the more interesting technology developments over the past couple of years is SpaceX’s foray into broadband, wireless internet service, more specifically, satellite-based internet provided by the Starlink Satellite Constellation. The project is particularly well suited for SpaceX, which claims to be “the world’s leading provider of launch services – and the only provider with an orbital class reusable rocket.”

It turns out this is a really good thing – and really makes SpaceX the only private company so far in the US that could undertake this endeavor, having their own fleet of reusable rockets along with the launch infrastructure and knowledge necessary to populate their Starlink constellation with many small satellites. And I really mean MANY. As of early 2021, the Starlink Satellite Constellation consisted of over 1,300 small satellites orbiting the earth in several low-earth orbits (LEO) in orbital shells 210, 340, and 690 miles above the earth. By year’s end, they plan on having 1,584 operational satellites providing internet access to consumers. Each satellite is relatively small (570 pounds) and SpaceX is able to launch up to 60 of these satellites at one time, using their Falcon 9 rocket. They are currently launching approximately every two weeks.

And this is really just the start of a huge undertaking. Per Wikipedia, the FCC had already approved 12,000 Starlink satellites, and back in 2019 the FCC and Starlink submitted filings to the International Telecommunication Union (ITU) to provide spectrum for an additional 30,000 satellites. This would bring the total to about 42,000 of these LEO satellites, providing global coverage for their satellite internet consumer base. While this appears to be great news for expanding global broadband internet coverage, clearly an important achievement, the sheer number of satellites is raising concerns among both environmentalists – who are understandably concerned about the exploding space debris problems, as well as astronomers – who are concerned that so many satellites could seriously jeopardize their night-sky viewing. But SpaceX has some very promising solutions – at least to the night-sky brightness issue, which we’ll pick up again in a bit.

OK – Enough background. So what is the current state of Starlink Satellite Internet from a consumers point of view?

Starlink is currently delivering what they refer to as “initial beta service” both domestically and internationally. They claim that during beta, users will experience data speeds that will vary between 50Mb/s to 150Mb/s and latency from 20ms to 40ms in most locations. This low latency is very impressive considering that typical latencies from current satellites is on the order of 500ms. This low latency is achieved via the low-earth orbits, which for the Starlink constellation will be approximately 60 times closer to earth than the standard geo-synchronous orbits of traditional communication satellites. There will also be “brief periods of no connectivity” as the relatively few numbers of satellites fade in and out of view of a particular location. Remember that satellite internet requires direct line-of-sight between the orbiting satellite and the subscriber’s satellite dish. Performance (speed, latency, downtime) is expected to steadily improve over the coming months as more satellites populate the Starlink Constellation. The plan is to have “near global coverage of the populated world” by the end of 2021. Currently, Starlink is only available to a limited number of customers, in a limited number of locations.

Starlink satellite internet currently costs $99 per month and $499 for the startup hardware kit, which contains the Starlink satellite dish, Wi-Fi router, power supply, cables, and mounting tripod. You also must have a clear view of the sky so that direct line-of-sight can be maintained with their satellites. Starlink has an app to download that will help you assess the field-of-view at your location. Generally, you want to mount the dish so there is an unobstructed view of the sky – no trees, hills, buildings between the dish and the satellite. This may involve installing the dish on your rooftop.

While the monthly service fee of $99 is higher than most broadband users experience, Starlink can provide broadband internet access to rural and remote communities around the globe, where broadband access is unreliable or non-existent. The service also comes with no data caps at this time.

Can Starlink service be aggregated with other broadband sources, such as LTE, 5G, or wired?

Yes! And this is actually a great solution for the unpredictable nature of Starlink’s performance and its downtime issues. By using an SD-WAN device that supports broadband bonding, all available broadband sources, including Starlink satellite, cellular, and/or wired lines, can be aggregated to ensure that any single outage (such as the Starlink system being unavailable) will not be noticed by the user, because the device will seamlessly manage and aggregate the connections (satellite, cellular or wired) into a single virtual and reliable Internet pipe.

But be careful. Most SD-WAN solutions on the market either do not have this capability at all, or the resulting performance is less than adequate. Mushroom Networks has been successfully aggregating satellite communications for years and their SD-WAN devices are the perfect complement to your new Starlink system that may have unpredictable downtime and performance degradation issues that are common with satellite.

As we touched on briefly earlier, tens of thousands of satellites in low-earth orbit have the potential to negatively impact sky viewing – both during the day and night. Even though the Starlink satellites are relatively small (at around 570 pounds each), glint and diffuse scatter of sunlight, and even moonlight, can contaminate the night skies for astronomers, and the daytime sky for the rest of us. These effects are most noticeable around sunrise and sunset, when the satellites are still fully illuminated by the sun, but the earth below the satellite is dark.

As a result, SpaceX outlined the issues and their proposed solutions, which they are able to model in their labs and then test – in orbit – using actual satellite prototypes and/or modifications to their satellites. Two of their major goals are:

We’re doing this by changing the way the satellites fly to their operational altitude, so that they fly with the satellite knife-edge to the Sun. We are working on implementing this as soon as possible for all satellites since it is a software change.

We’re accomplishing this by adding a deployable visor to the satellite to block sunlight from hitting the brightest parts of the spacecraft. The first unit is flying on the next launch, and by flight 9 in June all future Starlink satellites will have sun visors. Additionally, information about our satellites’ orbits are located on space-track.org to facilitate observation scheduling for astronomers.

For more information, I encourage you to check out the very interesting SpaceX update from April of 2020, Astronomy Discussion With National Academy of Sciences.

Starlink’s satellite internet is a significant step forward in providing high-speed internet access to the entire planet. For many rural and remote communities, installing the cabling and physical infrastructure necessary to provide high-speed, wired internet access is simply too expensive to be cost effective for service providers. Underserved communities in these areas will be able to use the Starlink Satellite Constellation by simply installing a small satellite dish.

Starlink’s overall performance right now (during beta) is very promising, although fluctuations in speeds and latencies, and complete outages, will remain an issue over the next few years and perhaps beyond, until the satellite constellation is fully populated and the system matures. And even after maturity the nature of satellite will continue to vary the performance and reliability. Combining Starlink satellite internet service with other broadband sources, such as cellular and/or wired, by using SD-WAN, will add flexibility, reliability, and robustness to your internet connectivity solution.