IoT cellular gateway routers - What are they and do you need one? 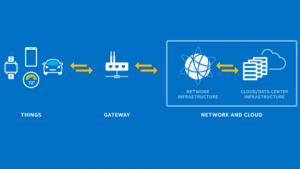 Before discussing the cellular IoT gateway, let’s take a step back and discuss IoT in general.  We’ll look at some use cases and naturally discuss the IoT gateway, which of course ultimately connects things to the Internet.

IoT has become a fairly general term that basically refers to any “thing” (typically a device, sensor, actuator, monitor) that interacts with its physical environment in some way and needs to be able to communicate in a networked environment to achieve some end goal. When my blue-tooth enabled sneakers text me that I’ve only walked 42 steps today, or my health-monitor bracelet texts me to let me know that I’ve been lying on my sofa for the last 8 hours, these are certainly good examples, if somewhat limited and simplified, of IoT. Specifically, these and other use cases involving personal networked wearables and/or smart-home technologies are commonly referred to as Consumer IoT, as opposed to Industrial IoT, where the use cases and networking requirements become much more involved, challenging, and interesting.

For the previous two examples, the networking and gateway requirements are straightforward and relatively easy to implement. Most of these consumer IoT devices are typically only required to transmit over short distances (within the home) and are not overly concerned with power consumption, as they are relatively easy to charge. They will usually simply connect to your smart phone via Bluetooth and/or your LAN via your Wi-Fi router. Even a smart house, with dozens of sensors and smart appliances, is a fairly easy challenge from a networking gateway standpoint, which current (and always developing) Bluetooth and Wi-Fi technologies can handle. Similarly, the amount data that needs to be transferred is limited and not a significant challenge.

The situation changes dramatically when we turn to Industrial IoT. A classic example here are “smart” buildings, where IIoT is already having a substantial impact in dramatically reducing energy costs and improving operations in the building such as from employee comfort and productivity to manufacturing efficiency. Typically, these buildings are outfitted with thousands of sensors monitoring such metrics as individual room and hallway temperatures, lighting, energy consumption, and human occupancy. There may also be security cameras and motion sensors, as well as high bit rate data such as live video of manufacturing floors. And many of these devices and sensors will come from different vendors and speak different languages or protocols. As you can imagine, the cumulative amount of data starts to look a bit more challenging.

Another great example is “smart” agriculture or farming. Here, IIoT is also proving to be highly valuable as IoT is used to measure and control temperature, soil water content and irrigation; track valuable assets, equipment, and even livestock; monitor expensive farm machinery for oil levels or usage; maintain optimal climate control conditions for barns and other structures; provide video surveillance and other security monitoring, again with growing number of data that needs to be transmitted to storage and compute resources.

Connecting each and every device directly to the Internet is clearly not feasible, nor desirable. Ideally, these devices and sensors need to be as low power as possible so they can operate for extended periods without external power. The devices need to be as inexpensive and as simple as possible, so that there is little downtime due to individual device failure. And due to the sheer number of devices, the amount of information sent to and from the Internet must be locally controlled so as to not swamp your network with unnecessary traffic.

So, the IoT gateway has a lot more to do than traditional gateway/routers, that essentially act as simple bridges between your LAN and the Internet. The IoT gateway must perform (at least) these following functions:

This required functionality naturally leads to the idea of a “smart IoT gateway”, which has the advanced capabilities needed to intelligently manage the large amounts of data generated by potentially thousands of IoT devices. In fact, these smart IoT gateways are already transforming the IoT landscape by introducing (and re-defining) the concepts of “edge computing” (computing that takes place at the nearest “edge” of your LAN network), or “fog computing” (computing that has been moved from the “cloud” down to your edge device).

Protocol translation is a critical part of the IoT ecosystem, even as the industry struggles to standardize both transport (think hardware) and communication/data (think software) protocols. In this context, transport protocol refers to the lower-level, physical requirements and specifications and requires some sort of hardware solution at the IoT edge. Some of the most common of these IoT transport protocols include BLE (low-energy Bluetooth), LoRaWAN, ZigBee, Z-Wave, SigFox, and many others.

Communication or data protocols, on the other hand, specify higher level, application layer requirements. Again, there are hundreds of these standards currently in the field, but some of the most common are CoAP, MQTT, AQMP, DDS, and HTTP. Typically, the underlying transport for these protocols will be TCP/IP.

While a detailed discussion of IoT protocols is beyond the scope of this blog, if you’re interested in reading more, there is a great discussion of this in the Postscapes article IoT Standards and Protocols.

More and more companies are coming out with products that are designed specifically to facilitate these protocol translations, such as Red Lion, SAP, Bosch, and others. These devices can then forward the sensor information either to the IoT gateway, or in some instances, directly to the Cloud.

Provided the various architectural trends in flux and the numerous physical protocol standards for the IoT sensors, having a modular design where the protocol translation (IoT adaptors), and data processing/storing functions are separated from the pure networking component, namely the IoT gateway router.

As the IoT industry continues to mature and standardize, many of the big cloud computing companies are offering comprehensive, cloud-based IoT platforms to complement the overall IoT solution. Some of these companies also offer IoT edge devices to perform the necessary protocol translations and therefore will work seamlessly with IoT gateway routers.

What we really need is a very smart multi-WAN/multi-SIM gateway.

The requirements for the cellular IoT gateway router lead us to an SD-WAN (Software Defined WAN) solution. Current state-of-the-art network edge appliances use a combination of SD-WAN and multiple cellular WAN connections to achieve previously unobtainable levels of network connectivity reliability and robustness. And the most advanced of these SD-WAN edge appliances can also perform broadband bonding, whereby the multiple WAN/SIM connections (3G/4G/LTE/5G) are combined into a single, highly reliable, high bandwidth Internet connection. By utilizing WAN connections from multiple providers (ATT, Sprint, T-Mobile, Verizon for US, and international carriers worldwide), the SD-WAN device ensures that the highest quality IP pipe is created, even as the performance of each individual SIM may vary and fluctuate dramatically.

Another critical feature needed by the IoT gateway is the ability to customize data flows. It may be necessary for the data from a particular group of sensors to be handled differently depending on certain conditions being met by the data. Video data may need to be handled differently from voice data or other telemetry. Some data may be more mundane, without needing any special treatment, while other data may be highly time-critical and require minimal latency, while still other data may require higher bandwidth to stream live video. This problem is further highlighted if the gateway router is to be shared for other non-IoT data flows, such as office network traffic. These types of requirements demand some sophisticated overlay tunneling capabilities by the gateway, that can be realized using Network Function Virtualization, or NFV. The tunnels created using NFV can be very sophisticated and customized for specific data flows. VoIP data can be sent over tunnels designed to optimize VOIP traffic, while video or other telemetry can be sent over tunnels designed to optimize those data flows, without interfering with the performance of each other.

Hopefully, this brief discussion has helped in your understanding of IoT, some of the differences between consumer and industrial IoT, what an IoT gateway needs to do, and how a smart, SD-WAN cellular IoT gateway router can be utilized when wired connectivity is unreliable or unavailable.