What Does Hybrid Cloud Management Mean to IT Managers? 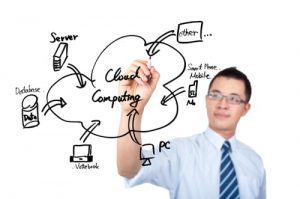 Best of Both Worlds: Considerations in Implementing Hybrid Clouds

The cloud continues to fumble its way toward definition, and while the industry has pretty much settled on the various service-delivery models, such as Infrastructure as a Service (IAAS), Platform as a Service (PAAS), and Software as a Service (SAAS), there is still a lot of discussion ongoing about the best way to provide each service.

In terms of IAAS, much of that discussion has centered on how best to leverage the benefits of public cloud computing, such as rapid scale and provisioning of resources, against concerns like security and data privacy. Companies want the benefits of a public IAAS platform, but the security control of an in-house private cloud.

Enter the hybrid cloud model. In a hybrid cloud, enterprises utilize a private cloud infrastructure that they control directly, and utilize public cloud resources to give them the ability to rapidly scale. In this model, key assets and data are retained in-house, with less critical public-facing servers deployed in the public cloud, and secure network connectivity provides communication between the two environments.

Advantages of a hybrid cloud management model include:

Of course, as you might imagine, hybrid cloud deployments don’t solve every problem, and they often create entirely new issues to deal with. There are definitely considerations to think about when it comes to hybrid cloud management. Here are a few important points to consider:

Hybrid clouds offers a lot of potential to enterprises, offering the ability to scale rapidly while protecting critical data. But hybrid cloud management is something that shouldn’t be taken lightly, either from the standpoint of planning or implementation.

Mushroom Networks has implemented hybrid cloud solutions for many customers, and we would love to discuss hybrid cloud management for your enterprise. If this is something you’d like to discuss, contact us today to get started.

Facebook
Twitter
LinkedIn
PrevPreviousVoIP jitter under control? Will cloud based VoIP based back-end analytics a game changer?
Next3 Aspects That You Must Have in Place for Excellent Hybrid Cloud PerformanceNext