How to reduce MPLS cost with SD-WAN 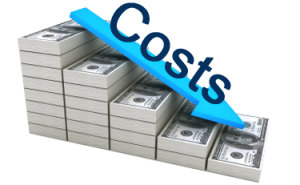 MPLS (Multi-Protocol Label Switching) has been one of the primary methods for carriers and Internet service providers to provide premium point-to-point connectivity for businesses. The primary use case of MPLS links is connecting various branch offices to each other, which is done by connecting private networks over layer-2 and attaching layer-2 labels to the packets as opposed to using the layer-3 IP addressing based scheme for delivering the packets to their destination. Since only this private network understands the layer-2 labels and since the public Internet doesn’t understand those layer-2 labels (the Internet speaks layer-3), MPLS networks do not naturally connect to the public Internet. However, one termination point of the MPLS network is often designed to be in the data center (or headquarter office) where there exists a backhaul connectivity to the public Internet. So, it becomes possible for the branch offices to connect to the public Internet via the data center backhaul using MPLS transport.

This is all well and good. However, you can imagine the limitations on performance for the branch offices for Internet access, as in most cases the premium cost MPLS pipe will be the bottleneck. For all practical purposes, the MPLS speeds will be significantly lower compared to the backhaul speed at the data-center. Of course, one can upgrade the MPLS network to increase the speed, however, MPLS services are notoriously expensive and bumping up to the next tier is usually out of the question because of cost limitations.

MPLS cost is one of the primary reasons why MPLS growth has flattened in recent years, even with the enormous growth in data usage and cloud connectivity needs of businesses, both small, medium and large. Projections suggest that MPLS revenue will start to decline (if it hasn’t started yet). The reason for this decline is the technology that can intelligently merge the best of both worlds from the quality of MPLS networks and the cost effectiveness of layer-3 bandwidth.

By combining these connectivity transports using SD-WAN (also referred to as broadband bonding or WAN virtualization), businesses can combine two or more Internet connectivity resources. So, rather than upgrading to a very expensive MPLS service, the business can add cost effective broadband such as DSL, Cable, or even 4G LTE or 5G into their WAN resources to increase performance and reliability without the outrageous cost of MPLS.

With SD-WAN devices in the offices, businesses can either add cost effective bandwidth, or in some cases, fully replace their MPLS networks with SD-WAN. Because of the agility built into some of the SD-WAN solutions, the application flows are intelligently managed and routed around network problems, therefore raising the quality of the WAN links beyond their standalone SLAs. As an example, a single WAN link may have three nines reliability, however, combining three such WAN links will raise the reliability to six nines – well beyond typical MPLS reliability.

IT managers interested in dealing with their out of control MPLS costs, should consider adding SD-WAN capability to their networks to gain the ability to inject cost effective bandwidth resources without reducing their SLAs and connectivity quality.