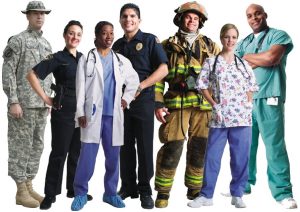 While broadband wireless communications has obviously transformed all of our lives in countless ways, wireless connectivity for first responders has been far from the robust, reliable network necessary to serve the public, protect and defend, and provide emergency medical services at all times and in all circumstances.

Federal, state, and local municipalities have struggled for decades to provide many critical services in challenging environments – from national disasters to huge outdoor music festivals, concerts, or sporting events. If they’re lucky, they only had to contend with all the other users trying to get on public WiFi networks, while working with standard, commercial devices. Often, due to public funding difficulties, many of these first responders had to, and are still, dealing with sub-standard devices (phones, laptops, tablets) and a sub-standard digital ecosystem (data center and network accessibility) that is woefully inadequate for the life-and-death services that first responders provide.

It might seem insane, but the following scenarios have almost certainly occurred in some form or other multiple times over the last few years:

So, someone watching a cat video on YouTube (nothing against cat videos! I love them too.) or googling “Conservatorship” (FREE BRITNEY!) may very well have tied up valuable bandwidth that was critically needed by a first responder. Seems like a dedicated, first responder, broadband wireless network should be a national priority. And now it is.

Congress Actually Does Something Good!

A commitment to establish a network dedicated to support first responders was formalized in 2012 by the United States Congress:

Public safety organizations and associations advocated before Congress for a dedicated, reliable wireless network for first responders. Their advocacy efforts led to the passage of legislation in 2012 to create the First Responder Network Authority to deploy the FirstNet network in all U.S. states and territories, including rural communities and tribal nations.

FirstNet is an independent authority within the U.S. Department of Commerce. Authorized by Congress in 2012, its mission is to develop, build and operate the nationwide, broadband network that equips first responders to save lives and protect U.S. communities.

FirstNet will build a new Band Class 14 network [more on Band 14 below] designed to be reliable, functional, safe and secure, and provide optimal levels of operational capability at all times. For the first time, public safety communications will be based on commercial standards. This will bring the benefits of lower costs, consumer-driven economies of scale and rapid evolution of advanced communication capabilities.

The FirstNet charter included prioritizing and ensuring reliable communications for the following groups:

At this point you’re probably thinking, “Great! Another giant government agency in charge of first responders communication technology. Just what we need.” Fair enough. But, this time, the government realized that in order for the FirstNet program to actually work, it would need to be coordinated and led by the top actors from the private sector.

The First Responder Network Authority decided to partner with AT&T, who would be responsible for actually building out the network, as well as deployment and general operation. AT&T could leverage all of its own resources, and bring in outside technical capability when needed. Here are some key points to this public-private partnership business model:

The First Responder Network Authority oversees the testing and validation of the network, as well as the products and services before they are deployed so first responders will have the proven tools they need in disasters and emergencies.

The network is delivering more than just a public-safety-dedicated wireless connection – it is also creating devices and apps ecosystems that will connect first responders to innovative, life-saving technologies:

Life in the Fast Lane

With the FirstNet Network, public safety gets a dedicated “fast lane” that provides highly secure and highly available communications. FirstNet delivers specialized features to public safety that are not available on wireless networks today – such as priority access; preemption; more network capacity; and a resilient, hardened connection.

While AT&T will continue to use all of its available LTE spectrum to support FirstNet, it will also rely heavily on the 20 MHz of spectrum around 700 MHz, or Band 14. According to an AT&T blog from May, 2020

Band 14 is nationwide, high-quality spectrum set aside by the government specifically for FirstNet. And with Band 14 deployed in more than 700 markets, we’ve surpassed 80% of our Band 14 nationwide coverage target – well ahead of schedule.

We look at Band 14 as public safety’s VIP lane. In an emergency, this band – or lane – can be cleared and locked just for FirstNet subscribers. That means only those on FirstNet will be able to access Band 14 spectrum, further elevating their connected experience and emergency response. That’s unique in the industry and something public safety won’t get anywhere but on the FirstNet network.

For a nice discussion of what a “fast lane” means in more general terms of internet connectivity and how QoS (Quality of Service) is a critical component, check out our previous blogs, “Dynamic QoS – what is it exactly and why you should care”, and “Egress QoS and Ingress QoS”, and “Bufferbloat – what is it and why you (or your vendor) should care.”

As part of the FirstNet ecosystem, besides providing the critically needed internet priority “fast lane” for first responders, devices and apps that utilize and enhance the network are constantly being added, after being tested and approved by the First Responder Network Authority. The devices typically just need a FirstNet SIM card (and possibly a software update) and they are then fully ready to use the FirstNet network.

Below is a sampling of the currently supported devices, and the list will continue to grow and will continue to offer state-of-the-art products for years to come. The list is quite large and represents the expected cross-section of leading commercial brands. Pricing for devices is not provided on their website, but presumably the pricing will be competitive. A few examples follow:

The FirstNet App ecosystem is populated by hundreds of state-of-the-art apps guaranteed to work seamlessly with your FirstNet device and plan. FirstNet reviews every app and ensures it meets their standard for security, reliability, and relevance. The apps support many disciplines, such as law enforcement, fire and rescue, wellness and safety, hazmat, dispatch, emergency management, and critical infrastructure. The apps can also be divided into categories such as device security, cloud solutions, CAD solutions, video surveillance, inside-building coverage and mapping, and others.

Most apps support both IOS and Android devices.

AT&T claims that FirstNet wireless coverage reaches more than 99 percent of Americans, including Hawaii, Alaska, D.C, and is currently being extended in the tribal nations and 5 U.S. island territories. The network uses the FirstNet Band 14 spectrum, as well as other spectrum bands in the AT&T commercial spectrum portfolio.

For agencies or organizations, the smartphone plans above are still offered, but it would more likely make sense to use AT&T’s “pooled data plans” that combines all the data used by all devices for a given agency or organization. The 2 GB pooled data plan starts at $28.50/mo, and there is a 50 GB plan for $227/mo, a 1000 GB plan for $3702/mo, and several other intermediate plans. These all include text, voice, and data, and there are also “data only” plans that are slightly less expensive.

The FirstNet initiative is a long overdue, but very welcome and significant advancement in equipping first responders, and their support network, with high-reliability and high-availability wireless access during the most challenging, and life-threatening, situations. It represents a complete re-thinking of how emergency broadband wireless access should be managed. And there are many success stories that reflect this new reality:

“When we get a cardiac call, our initial goal is to get an EKG read on our patient. We use FirstNet to transmit that EKG lead to the hospital. Having that information to that doctor within minutes of being on scene can save a life.”

“When I first heard about FirstNet, it immediately sounded like something that we needed for our school buses. I presented the idea to our board, my supervisors, my superintendent, and my district manager, and everyone was unanimously on board. The safety aspect is really what sold us. If a student is unable to be located, I can quickly send out a message to all appropriate parties and significantly reduce the time that student is not accounted for. That’s what we value the most. Peace of mind.”

“It is vital that every utility has the capability FirstNet provides.”