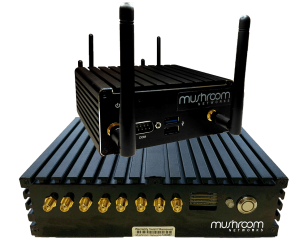 Cellular Bonding – Solution to all your problems?

Well…no.  But cellular bonding is a powerful new international technology that is already transforming how cellular modems are used.  As a result, many companies worldwide are finding new applications using cellular bonding where portability, high-bandwidth and high-reliability internet are mission-critical.
What is Cellular Bonding and why do I need it?
Cellular Bonding refers to the process whereby two or more cellular modems are combined in an intelligent way that allows the end user to utilize the combined bandwidth. Bonding can occur for any combination of cellular service providers but using modems from several different carriers (AT&T, Sprint, Verizon, or any international carriers) has definite advantages. As one carrier’s signal degrades as a function of time, bandwidth demand on that carrier can be shifted to a different carrier to optimize utilization and application performance. In fact, real-time monitoring of each channel’s vital statistics (latency, jitter, packet-loss) and forward error correction ensures that the best signal path is always utilized, on a packet-by-packet basis.
This allows for using cellular modems in new and exciting ways that would not be possible with only a single modem, due to its inherent bandwidth and signal quality issues.
Live-streaming using your cellphone
Of course, we all know that we can already live-stream videos to Facebook or YouTube using our cellphones which only have a single cellular modem.  But these video streams are relatively low-bandwidth and poor quality, due to typical uplink bandwidths of only several Mbps and a signal whose quality is constantly fluctuating (and dropping!) due to geographic location and overall network utilization and health.  Due to these inherent limitations with a single cellular modem, it has not been feasible to live-stream mission critical events using a single cell phone or modem.
Live-streaming using bonded cellular modems
Live-streaming professional, high-quality, high-reliability video is one application that cellular bonding will soon make routine. Streaming live video presents its own unique challenges, especially since streaming live video is often mission critical and sensitive to packet loss. If you’re live-streaming a real-time news event, entertainment show, or sporting event, if there is any problem in transmission of your video then your mission likely fails with the accompanying negative impact on bottom line finances and public relations. Even relying on a single internet resource (Cable, DSL) with a single point of failure is no longer an acceptable risk, since bonding together disparate cellular modems essentially eliminates this risk entirely and provides the necessary bandwidth, robustness, and reliability to enable professional-quality live-streaming video.
But does it work with your video encoder?
It sure does! As long as your video encoder implements a standards based encoding, cellular bonding will seamlessly work. As an example, Mushroom Networks recently conducted a joint test with DiscoverVideo’s Spider Multichannel Streaming Encoder paired with Mushroom’s Portabella 4000i 3G/4G/LTE/5G Broadband Bonding Appliance. The Portabella 4000i used 4 factory configured Verizon cellular SIM cards and the Spider device was configured to push 5 HD video streams. According to DiscoverVideo’s test team, “After plugging the bonded cellular internet from the Mushroom Networks device into the Spider, the result was flawless live video with no noticeable difference between streaming via landline or cellular.”
To Mars and Beyond
In fact, Mushroom Networks has achieved several significant milestones in the live video streaming arena over the past several years.  In June of 2015 NASA tested the Low-Density Supersonic Decelerator (LDSD), designed for landing missions on Mars. The test was performed in the airspace over Hawaii and was streamed live via Mushroom Networks Streamer PRO solution that leveraged Mushroom’s bonded cellular technologies from this challenging remote location.
The live-streamed launch was recorded and the recorded live feed can be seen here.  The Mushroom Networks Streamer PRO system utilized AT&T and Verizon 3G/4G/LTE/5G data cards, and provided an extremely reliable, yet cost-effective method of streaming live video from such a remote location as a jungle mountain ridge in Kauai, Hawaii.
It’s just a game (or the biggest gaming convention on the planet)
While preparing for a Mars Landing is pretty exciting stuff, Mushroom Networks is also helping to redefine how live-streaming from entertainment events takes place. For the last two years, Twitch Interactive has live-streamed from the world’s largest gaming convention, the E3 Gaming Expo. They also utilized Mushroom Networks solutions that were best suited for their mission-critical needs and limited budget. The resulting live-feeds provided full HD quality video of the multi-day event with no downtime or other degradation.
In Summary:
Imagine all the possible applications of using devices that bond together several cellular modems to allow for portable, high-reliability, high-bandwidth internet. Adding a Wi-Fi Access Point to these devices allows for even more possibilities:
· Providing high-bandwidth Internet access to train, buses or other mass transportation vehicles.
· Providing high-bandwidth Internet to any remote/field site – movie sets, military bases, construction sites, remote security cameras, first-responders and others.
Bonding together cellular modems provides significantly more bandwidth and stability than using a single card. By using the aggregate resources, new functionalities and applications are now feasible that would not be possible using a single cellular modem. We hope our brief discussion of some of these new capabilities, with particular emphasis on live-streaming of HD quality video using only bonded cellular modems was a good introduction to the possibilities with cellular bonding.

2 thoughts on “Cellular Bonding and Video​”