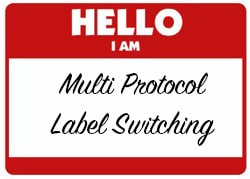 While many casual observers would assume that telecommunications is a fixed technology, that would be an incorrect assumption. As those of us who manage and support the networks that power our companies know, the field is constantly evolving, as companies and organizations look for new ways to move traffic more efficiently, and usually for lower cost, across ever-changing networks.

Within this framework, we will look at Multi-Protocol Label Switching, or MPLS, and what is next for MPLS networks. But let’s start with:

Prior to the development of MPLS, there were a number of dominant networking protocols in use, including Frame Relay, ATM, SONET, and Ethernet. These network types are still in use today to varying degrees and are used to move packets between different locations. These technologies provide connectivity and transport at the data-link layer of the OSI Model, allowing layer three packets (such as TCP/IP packets) to move from one host to another, usually across a wide area network.

However, the issue with those protocols is that they are all different and treat the packets they receive differently. When a given computer generates messages that it wants to send to another computer, it encapsulates that message into one or more packets, and sends them to the other computer more or less in order. These packets are modified as they leave the sending computer and move across the network, as more information (or ‘wrappers’) are added to the packet so that it can be moved to its destination.

And this, eventually, led to impacts on network performance and design. When networking was in its early years, packets could carry all of this overhead information. And it grew to become quite a bit of information. The average packet could carry 15-20 fields of information just for the packet itself, never mind the payload message itself. And different network technologies formatted their packets or frames differently, i.e. Frame Relay frames were entirely different from ATM cells. Thus, moving traffic between Company A’s network, which was Frame Relay based, to Company B’s network, which was using ATM, meant that a translation had to be made by the routers and switches that connected the networks. And if the carriers in question were using yet another type of transport, there was yet another level of translation to be done.

The Development of MPLS Networks

Over time, as networking grew exponentially in volume, it began to expose issues in the current ways that network traffic was being transported. Packets, cells, and frames all had different structures, with different lengths and fields, and the routers and switches were required to examine every single field, even though the vast majority of them were always empty. What’s more, these same routers and switches were required to re-format and encapsulate different cells and frames as needed, to move them between networks.

MPLS was developed specifically to address these issues, by removing the need to inspect every field of every packet and eliminating the need to re-format or encapsulate frames and cells. In MPLS networks, packets are assigned labels, which are really just streamlined headers that contain a greatly simplified set of information. All of the switches in the networks in question, then, just look at these labels, and nothing else.

This has the effect of greatly reducing the overhead needed to examine the packet and allows the use of any kind of transport network, transparently to the MPLS network. In other words, an MPLS network can make use of underlying transport technologies like Frame Relay or ATM, without it having any impact to the performance of the network.

What’s on the Horizon for MPLS

An MPLS network is a smart wide-area network idea and has its use in today’s branch office communications, owing to the reasons listed earlier. An MPLS network can be very costly however, as it is localized network architecture that is in most cases operated and provided as a service by a carrier. The premium pricing of MPLS also comes with limitations. As an example, in today’s diversified WAN architectures, relying on a single WAN transport for connectivity is a design flaw. However, combined with a WAN orchestration approach, MPLS networks still have some role to play in the near future.

The world of networking is always growing, so it’s hard to say what will be in place in even a few years. Wireless technologies, as well as broadband technologies continue to evolve, and this is bound to have an impact on wide area networking in general, given the fact that there is a rising swell of Software Defined WAN architecture and solutions.