Software-Defined Networking (SDN) and Software-Defined Wide Area Networking (SD-WAN) have reshaped networking from static, hardware-centric networking equipment to agile, cognitive, and software-driven networking solutions. Routers and firewalls no longer need to have custom silicon but rather can be implemented on architectures based on off-the-shelf x86 hardware. This new paradigm enabled services that can be delivered via networking software and other network services that are built on top of these commodity hardware. Some of the more sophisticated such services are grouped under the name of “Network Function Virtualization” or “NFV”.

In the early days of NFV, common NFVs included simple localized service components such as firewall, NAT, DHCP and others. In essence these network function virtualization efforts were aimed at mobilizing legacy services in such a way that they can be provisioned remotely from the Internet (a.k.a. cloud-first or cloud-driven). Mushroom Networks’ NFV framework includes such simple network functions and takes one more step to take advantage of the software defined architecture by creating modern Virtual Network Functions (VNFs) that don’t need to be localized but rather can be distributed.

1) VNFs, unlike traditional VPN tunnels, are capable of aggregating two or more WAN resources within the tunnel.

2) VNFs, unlike traditional VPN tunnels, are capable of implementing sophisticated algorithms that can steer IP packets between WAN paths for better performance and reliability.

As an example, Broadband Bonding is a specific type of Network Function Virtualization, an SD-WAN overly tunnel, that has the ability to monitor various parameters on the individual WAN transports (such as latency, packet loss, jitter, throughput and various other parameters) and make intelligent per-packet routing decisions to enable aggregation of WAN links for a fatter IP tunnel that can be utilized even for a single flow.

Another example of a Network Function Virtualization is an SD-WAN overlay tunnel such as the VoIP Armor, whereby the overlay tunnel optimizes the Voice-over-IP packets for the parameters that matter most for the VoIP application, namely, the Mean Opinion Score (MOS). 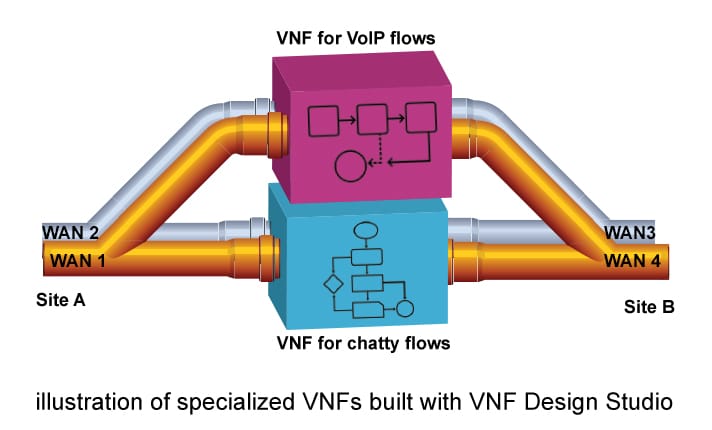 As illustrated in the diagram above, various distributed VNFs can live between two end-points (similar to how various VPNs can be built between two end-points), where each SD-WAN overlay VNF tunnel is optimizing the tunnel for a specific class of applications. These VNFs, combined with the layer7 filtering and/or explicit traffic filtering policies on the end devices, will assign each IP packet into the correct tunnel and therefore optimize the overall performance. This translates directly into improved end-user experience.

This framework enables organizations to easily roll out networking devices to their location(s) with ease, as the built-in advanced algorithms will self-optimize the end-user experience without requiring any human intervention.