Where is the bandwidth network bottleneck? 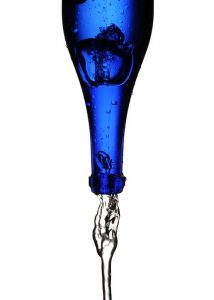 Recently Nature magazine posted a thorough article about bandwidth network bottleneck and researchers race to solve some of the fundamental challenges that can push us through the bandwidth limits. Even though limits in fiber optics and semiconductor chip technologies exist, they are usually less costly to improve and therefore are usually not the choke points. Connecting all the way to the end-users, is similar to a tree splitting into more and more branches to get to the leaves. When you can connect continents with direct fiber transports (without stemming into many branches), and get closer to the end user, (also known as the “last mile”), there needs to be a transport connecting every single end user to the nearest node. Even though a human can not live without arteries, no tissue can survive without the capillaries (the smaller last-mile blood connection to the tissue). There are 60,000 miles of capillary in a single human body — two and half times around the world — you get the idea.

So, when your Skype video pixelates, or when your phone call starts to drop every other word, it is most likely the bandwidth bottleneck at the last mile that is causing the issue. There are many parties who are motivated to get faster and more reliable Internet all the way to the end user including Alphabet (formerly known as Google), Facebook, Microsoft and others. Alphabet has been trying hard to lay down fiber for a handful of cities with limited success but is now pumping the brakes after higher than expected associated costs and resistance. It now seems like Alphabet will explore more of a wireless approach. Having followed closely point-to-multipoint wireless solutions as well as muni-wireless projects in the early 2000s, I can firmly say that those technologies are not without their own challenges.

There is also of course the resistance that is produced by the big “T” telcos, who are making sure no one else gets into their territory by taking advantage of the 1996 Telecom Act. Essentially, the legal system is blocking the cities from building their own fiber networks. It is still an on-going legal fight between the cities and FCC on one side and the monopoly telecom companies on the other.

Oddly enough, the last mile network bottleneck is even more severe for businesses. This is primarily driven of course by the larger demand for bandwidth in the enterprise compared to a residential use case. In today’s connected world, an enterprise office relies on being connected to the cloud — the larger server network in the core Internet, for a majority of the services they use and provide to their clients. In business applications, bandwidth bottlenecks can choke the application and services performance and bring the business to its knees, as the video on the top-right corner on the following page nicely portrays: https://www.mushroomnetworks.com.

Facebook
Twitter
LinkedIn
PrevPreviousCan You Rely on IPSec alone for Security ?
NextWhat is VNF (Virtual Network Function) and why should you care?Next