How to Boost the Performance of FWA (Fixed Wireless Access) 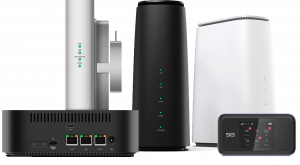 Fixed Wireless Access (FWA) is the internet access service that uses a cellular 4G/5G based backhaul. The most familiar version of cellular backhaul happens when you turn on the “hotspot mode” of your smartphone to have laptops connect to the smartphone’s hotspot via wifi to get connected to the internet. When you activate the hotspot mode, the smartphone is used as a passthrough bridge device to connect your laptop to the Internet via the 4G/5G connection of the smartphone. Similarly, MiFi devices are standalone modems that are set in hotspot mode and can provide internet access to your laptop via its wifi or in some cases via its Ethernet port.

In most of these smartphone hotspot and MiFi use cases, the device and its few users can be mobile – perhaps a passenger on a train or a family in an RV. The fluctuating performance of the 4G/5G connectivity might be acceptable in those types of use cases, however, those fluctuations will be showstopper in any type of more serious or mission-critical applications. Nonetheless, over the years as cellular technologies improved and evolved, MiFi devices became a logical solution candidate to many real world scenarios with mission critical use cases where wired connectivity was not a viable option. However, the inherent performance fluctuations and the unavoidable unreliability of cellular transport has been the achilles heel time and time again. Even though add-ons such as RF-repeaters and high-gain antennas can help with performance issues but not completely. If you tried broadcasting a live video feed over a MiFi and if the MiFi performance dipped during your broadcast, you will never rely on a single cellular connection again.

What if there was a clever solution to this? Curious? Then, read on…

Fast Forward to 2022, and newer 5G networks are now being promoted as up to 1Gb level bit rates with only a few millisecond latency by leveraging the mmWave 5G technologies. However, when you drill into the technology details, the glaring technical challenges become obvious. The mmWave 5G deployments require expensive and dense cellular infrastructure rollout that, by definition will have to be very limited in coverage, most likely only available only in densely populated urban areas. And even that limited deployment will take many years because of the built-in cost and economics of the rollout. Wherever available, the 5G backhaul for higher grade internet connectivity is however a very attractive value proposition for carriers to pass on. FWA (Fixed Wireless Access) is basically at the core of that value proposition. The current iterations of the FWA services are delivered via a modem 5G CPE device that can be installed in a residential house or a business. FWA is currently promoted as a viable alternative to wired Internet services.

If you are in the very small minority of residential or business customers that are located in an FWA coverage area, trying out FWA can be tempting, however, there are certain things that you need to consider. First and foremost, FWA is still based on cellular technology and therefore inherits all of the same shortcomings and challenges of cellular transport including unpredictable performance fluctuations and various reliability challenges. This by no means is a blame on the wireless industry, but rather simply an honest comparison of the wireless medium to the wired-line medium in terms of its technical advantages and disadvantages.

As with any new telecommunication technology, we expect the sub6 5G (non-mmWave) as well as mmWave 5G deployments to mature over the next decade and become noticeably better performing than today’s more mature and arguably better performing 4G LTE networks, however, some of the challenges, such as the lack of carrier diversity (i.e. a single service provider providing the service) as well as the unpredictable performance of wireless networks will always create speed bumps for certain use cases and applications – unless, there is a clever way to boost the FWA performance.

In its essence the idea is simple and is based on intelligently combining two or more internet access lines to create a fatter internet pipe. The technology works similar to an overlay VPN tunnel but rather than being over a single internet connection, it is over several of them and has the ability to schedule packets on various paths depending on its algorithms. Since Broadband Bonding is an overlay technology, it is transparent to the underlay networks, in other words, there are no infrastructure requirements from the cellular service providers to accomplish the aggregation. As a matter of fact, different carrier networks can be combined to create a faster and more reliable single connection without any coordination with the carriers.

As one can imagine, more than the concept, the successful implementation of the technologies and algorithms to overcome the challenges of the cellular networks is critical. Broadband bonding can be especially challenging with cellular networks where rapid fluctuations of the performance of individual cellular connections need to be intelligently managed to shield network problems from the applications. Algorithms that can monitor and learn the networks in real time and accordingly modify broadband bonding algorithms can successfully combine multiple 4G (or 5G) networks to provide an IP connectivity that is suitable for the most challenging applications. As an example, broadcasting live video over aggregated multiple cellular 4G/5G connections is one of the applications made possible by Broadband Bonding. Broadcast video is a mission critical application both within the media industry as well as within law enforcement and DoD use cases of live video.

Many other applications can be enabled in the media, transportation, energy, health, state and government sectors with broadband bonding two or more cellular connections. Since broadband bonding is inherently a transparent technology, any internet access technology can be combined with any other, including combining satellite with 4G/5G cellular. Now with the introduction of mobile satellite connectivity options whereby the satellite connectivity can continue during mobility, combining satellite modem(s) with 4G/5G cellular modems adds another level of diversity and therefore reliability.

Even though built-in modems provide a compact design for a Broadband Bonding appliance like this one, an Ethernet based Broadband Bonding appliance such as this one, has the advantage of being fully transparent with any internet access modem. In other words via its Ethernet WAN ports, one can practically combine any internet connection with any other, including internet access technologies yet to be invented.